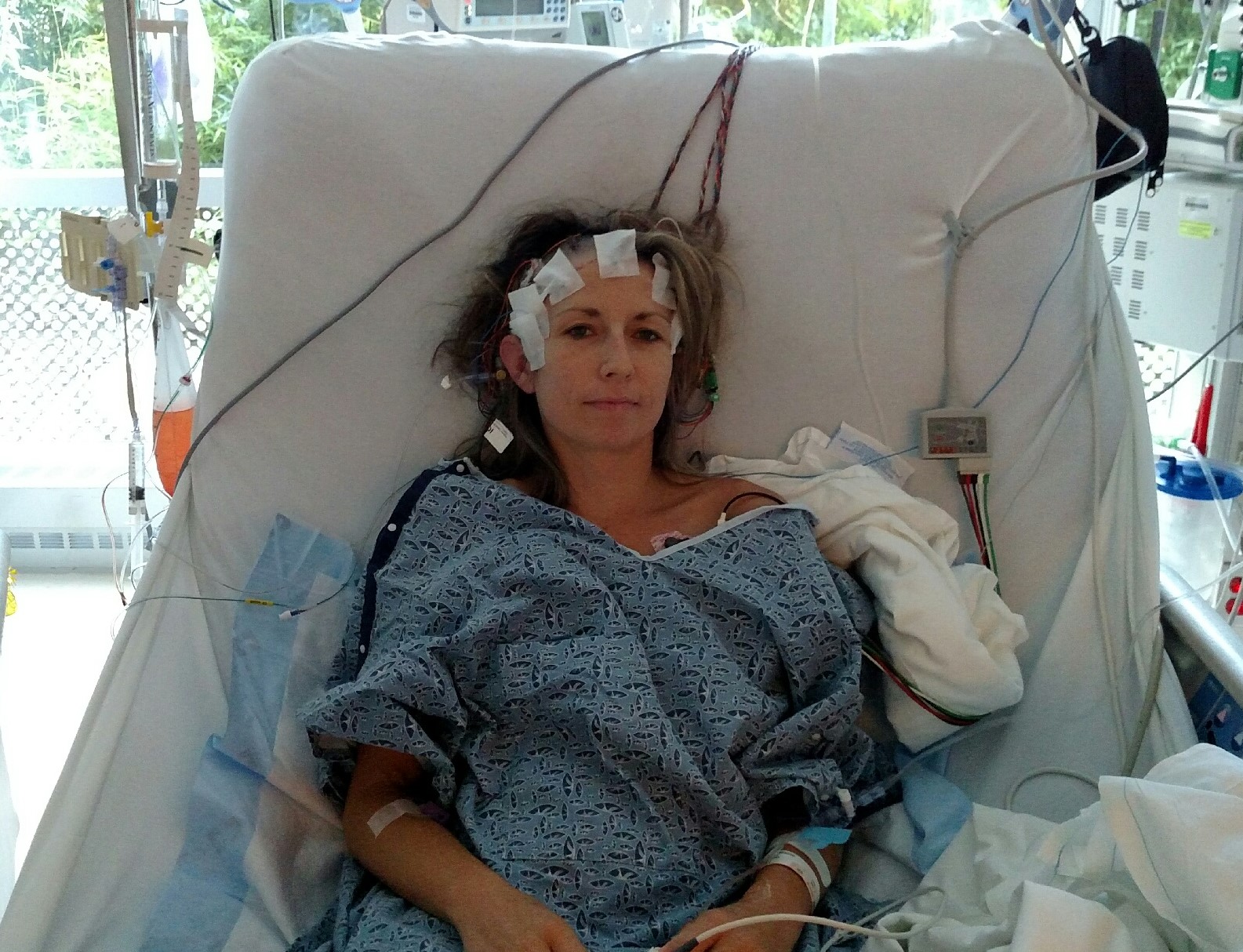 Welcome to part one of a multi-part blog series where for the first time, I publicly share my experience with a brain aneurysm rupture, my treatment and recovery, how it has affected my life, and eventually how I came to meet PT Cindy.

October 8th, 2016, I was spending a long weekend in North Conway, New Hampshire, with my husband and daughter. I was less than a month away from my 39th birthday. My daughter had just started kindergarten. It had been a sunny, mild fall day that we had spent hiking and leaf peeping. Around 7:00 p.m. that evening we were roasting marshmallows at the community fire pit in the condo complex where we were staying. I had a sudden, massive and burning pain up the back of my neck into my head. I’ve never been shot, but if I were to imagine what a gunshot wound feels like, that’s how I would imagine it. In a matter of seconds, my vision blurred. To this day, I don’t know what possessed me to take my phone out of my pocket and dial 911, but I did (it was probably my paranoia about contracting Ebola in 2016). I handed the open line to my husband and said, “You’re going to have to deal with this.” I took a few steps away and kind of stumbled-sat down on some steps and proceeded to vomit into the Hostas growing alongside the walkway. I remember hearing another marshmallow-roaster say, “I think your wife needs help.”

My memories from that point on are spotty. Emergency services arrived and it was too difficult to bring a stretcher down to where we were, so the paramedics had to help me walk to the ambulance. My balance was gone and it was difficult to put one foot in front of the other. I remember the police officer on scene being kind to my daughter. I remember trying to get to the ambulance but my body was in shock so a medic had to escort me into the restroom at the condo’s community room first (this was just the beginning of me having to put all of my pride aside). I remember the medic who attended to me in the back of the ambulance asking me to please contact him and let him know when I had a diagnosis because he had no idea what could be wrong with me as my vitals were still good. And that is where my memory ends for a few days.

I was taken to North Conway Memorial Hospital, where I continued to vomit and suffer severe head pain for hours while the attending doctor gave me injections for pain and nausea, insisting I was experiencing a migraine. My husband continued to argue that I didn’t experience migraines – I didn’t even get headaches! A nurse came in with discharge papers to send me home from the hospital. My husband refused. Around 11:00 p.m. (with our five-year-old now falling apart in the emergency room), the doctor finally agreed to do a CT scan. My husband left the hospital and took our daughter back to the condo to sleep. He received a phone call from the doctor at 3:00 a.m. that the scan showed bleeding in my brain, but that they didn’t have the technology and resources to properly diagnose or treat me at North Conway Memorial and my husband would have to choose where he wanted me transferred for treatment. My husband hung up and called my parents who were sound asleep in Connecticut. Together with my mother, who is a nurse, they chose to send me to Massachussetts General Hospital, closer to home and also one of the top-rated neurosurgery hospitals in the country.  At this point, I was still conscious, so I was packed up into an ambulance and sent on my way for the three hour ride to Boston. My husband collected all of our belongings around the condo, and he and my daughter got on their way too – driving backroads in an unknown area with the low gas light glaring at him for miles until finally finding a gas station and buying our daughter a donut, one of her favorite memories to recount.

An amazing team of medical professionals were waiting for me at Mass General when I arrived in critical condition. After performing their own scans, they knew immediately that I had a brain aneurysm rupture and took me directly into surgery. My parents had driven up from Connecticut and met my husband and daughter at the hospital. My surgeon told my family that if he came out in less than an hour, the news wouldn’t be good. If they didn’t see him for three or four hours, that was a positive sign and he was able to perform the surgery.

I had a subarachnoid hemorrhage – bleeding in the space between my brain and the tissue surrounding my brain – due to an aneurysm rupture in the left PICA (posterior inferior cerebellar artery) region. The PICA is the largest branch of the vertebral artery and supplies blood to the cerebellum, medulla and fourth ventricle. Surgery for these aneurysms is challenging, due to the deep location and intimate relation with the medulla and the glossopharangeal, vagus and accessory cranial nerves (IX, X, XI).  The doctors drilled a hole in my skull and placed a drain to remove blood and fluid and relieve the pressure off of my brain. They used a procedure called endovascular coiling to repair the aneurysm and stop the bleeding and ultimately stabilize my body.

Many people don’t know what an aneurysm really is – including me before all of this. I frequently used the saying, “I’m going to have an aneurysm.” Actually, one in every 50 people are living with an unruptured aneurysm. I would have had to say, “I’m going to have an aneurysm rupture,” to make that saying accurate. An aneurysm itself is a weakness in the wall of an artery. It will bulge out, sometimes looking like a little berry off of the side of the artery. It fills with blood as blood travels through the vascular system. Sometimes an aneurysm will get too big or the arterial wall gets too weak and the aneurysm bursts.

Endovascular coiling is a procedure where surgeons enter the femoral artery in the groin, and pass a catheter up into the artery containing the aneurysm. A microcatheter is then inserted into the initial catheter. When the microcatheter reaches the aneurysm, tiny platinum coils are released into it using an electrical current. The coils induce embolization – or clotting – filling the aneurysm and ultimately preventing any more blood from getting into the aneurysm.

On the morning of October 9th, 2016, more than 12 hours from the time my aneurysm ruptured, Dr. James Rabinov and his medical team were able to successfully perform endovascular coiling to treat my aneurysm and save my life. But this was just the beginning of my survival.

1 in 50 people have an unruptured brain aneurysm, or an estimated 6.5 million people in the United States. *

About 30,000 people in the U.S. suffer a brain aneurysm rupture each year.*

50% of brain aneurysm ruptures are fatal. Of those who survive, about 66% suffer permanent neurological defecits.*

15% of those who suffer a brain aneurysm rupture die before reaching the hospital.*