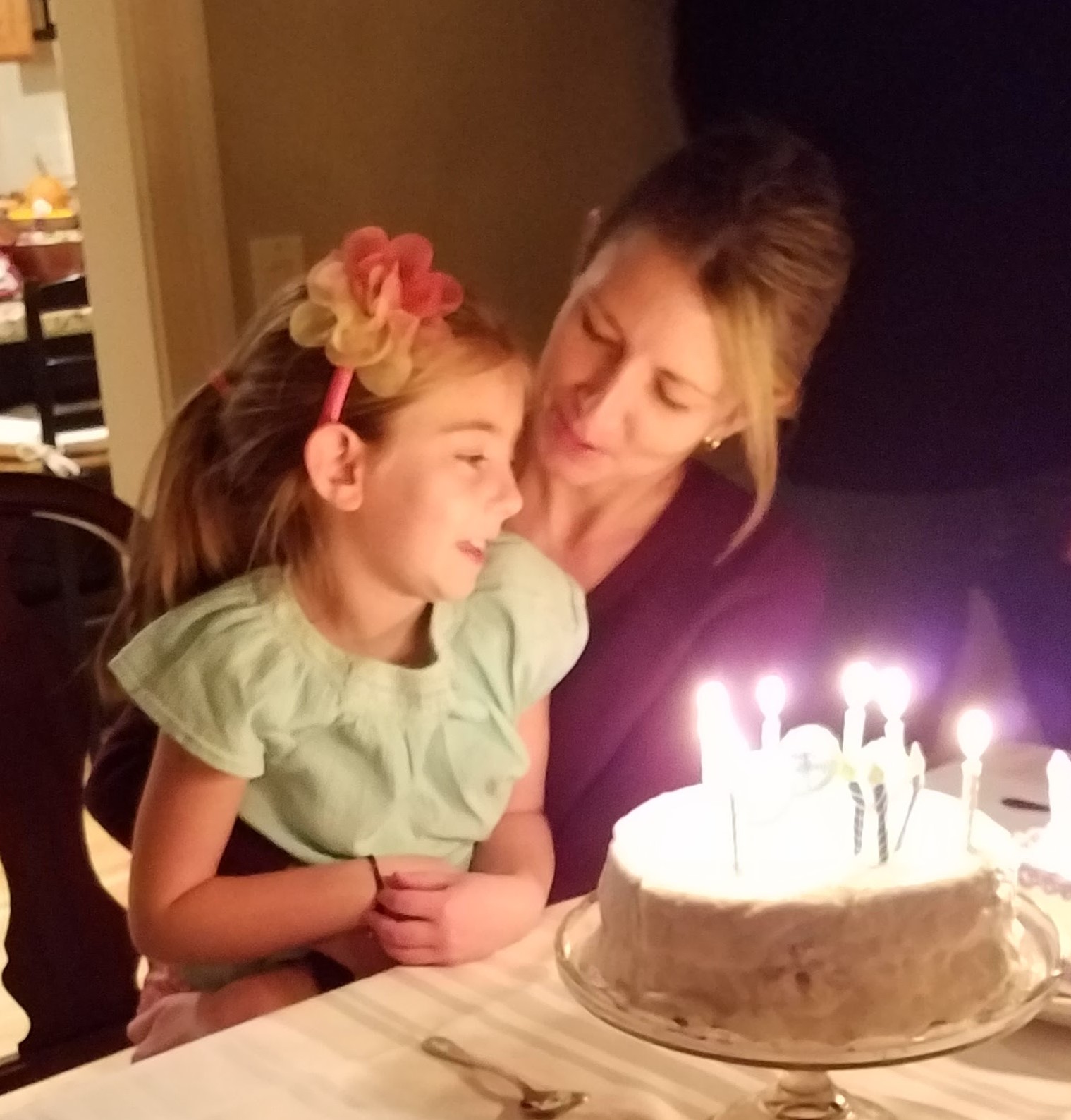 Returning home was terrifying. First, I live two hours away from Mass General, which was now the only hospital I would trust with anything to do with my brain. What if it happened again? I still had a severe headache and was highly sensitive to light, motion and noise. One of the main treatments for brain injury is rest. I was forced to rest in the hospital, but I was going home with a kindergartener. I didn’t have the stamina to return to my normal life. I wasn’t allowed to drive until I weaned myself off the pain meds.  And on top of all of it, I had major post-traumatic stress syndrome. I was scared to close my eyes at night, alone in the silent darkness of my bedroom.

To say I am grateful for the friends, family and neighbors who showed up for my family isn’t even enough. My mom stayed with us the first week, and then my dear friend, Danene, left her own family in Illinois and stayed with mine for a week to help. Other friends took my daughter for playdates. And my neighbors organized a meal train that provided us dinners for over a month.

I showed up for the things I had to show up for. Those who know me know I will not let my daughter down. I returned home on a Friday, and that Monday was the Halloween parade at her elementary school. I got dressed, covered my head and went to that parade. Loud music, motion, screaming kids down the hallways of her school – and I propped myself up against the wall to be there.  I had lost a significant amount of weight in the hospital and I’m not sure which was worse – the noise and over-stimulation or the other parents staring at me not knowing what to say. I went home and went to bed.

As the constant companionship dwindled and I was alone, I started to cry. Every single day.  I would find myself taking a shower or cooking something and just become hysterical. On the outside, I was a warrior. Physically, I was starting to feel better. My headache disappeared. On the inside, I was battling the guilt of almost dying and what witnessing the whole experience had done to my daughter, my own PTSD from the whole event, and the fear of the unknown – was my time limited? Would I need more surgeries? Would I have another aneurysm?

But, returning to normal life is what I had to do. I started walking as soon as I got home. Of course, at first I was just slowly walking around the cul de sac right outside my house, but I was moving. I stopped taking the oxycodone within a few days so I could drive again. I went to school and read to my daughter’s class two weeks after returning home and threw her a birthday party with 15 kids. I sent the Christmas cards and baked the cookies and did all the things. I definitely wasn’t living up to my normal level of functioning. I would leave my house to go somewhere like CVS and on the way forget where I was going. List-making became an essential part of my life. I might only complete one task each day, but I was functioning.

After Christmas, I was still crying. I’d be driving down 44 and an ambulance would go by with lights and sirens and I would explode in tears. I had always run to release my emotions. Now I wasn’t allowed to run. I read 10% Happier: How I Tamed the Voice in my Head, Reduced Stress Without Losing my Edge, and Found Self-Help That Actually Works – A True Story, by Dan Harris. I decided to meditate. I had dabbled in meditation in the past and even led guided meditations when I was teaching yoga, but never had a routine. I began a very simple meditation and breathing practice every day. I regained control over my thoughts and emotions.

And it was a good thing I did this, because in May, at my six month cerebral angiogram – a procedure where a catheter is inserted through the femoral artery and guided through the blood vessels into the neck and head where contrast dye is injected and X-rays are taken – I was informed that my aneurysm had grown. I was devastated.

At the beginning of July I went back to Boston for a second surgery. More endovascular coiling was done to fill up the empty space where the aneurysm had grown. Then, they placed a stent into my artery to essentially cut off blood supply to the aneurysm and strengthen the artery. The goal was for cells to grow along the stent and for it to basically become part of my artery. I only spent one night in the ICU and I was so happy to leave this time.

The clock started over again, and now I waited for my next angiogram six months later. I still wasn’t allowed to run, but I was walking and started going to Pilates three times a week. I had never been so weak – the first time I was instructed to do a roll up (basically a sit up from lying fully extended on the floor) I couldn’t do it! I was a work in progress.

I was determined not to let fear take over my life.

Six months later, an angiogram showed that cells had started to line the interior of the stent in my artery – it was working. I was allowed to start running again!

Running became a major part of my life again. The freedom, the fresh air, the comradery and friendship of fellow runners – I had it back. I had to slowly build up stamina again, starting with two or three miles, eventually making a regular daily run four or five miles. Last year I ran the Army 10-miler with friends.

October 2021 was my five-year survival anniversary. To commemorate this milestone, I decided to run the Falmouth Road Race in August on the Brain Aneurysm Foundation Team. I raised close to $4,000 for the BAF team due to the generosity of my friends and family. In early July, I got the great idea to follow a training program that had been sent to me. I was already running the distance – the Falmouth Road Race is only seven miles. My time was pretty good. I shouldn’t have messed with things. Just a few days after starting sprints, I was in pain. At first I thought I must have a hairline fracture in my ankle or shin. But I continued to try to run on it because I couldn’t stop all together at this point. Two weeks later, I could barely walk. I was hesitant to go to the doctor or get an X-ray because I didn’t want to be told I couldn’t do the run. A friend of mine referred me to Cindy Langer of Bodyfit Physical Therapy. I sent Cindy an urgent message. I only had three weeks until Falmouth.

Cindy immediately diagnosed me with Posterior Tibial Tendonitis – likely from sprinting. She said, “We’ll get you through the run.” She assessed my running gait, gave me exercises to do at home and performed ultrasound, dry needling, deep tissue work, cupping, stretching, scraping, and taping twice a week leading up to the run. I made it to Falmouth. It wasn’t pretty. I had a stomach bug for four days leading up to the run. It was 95 degrees. I couldn’t stay hydrated. My miles were a full minute slower than before the tendonitis. A couple miles in, my leg hurt. Badly. I was miserable and angry and frustrated. But I ran it. As I crossed the finish line I stopped at the medical tent for a bag of ice. 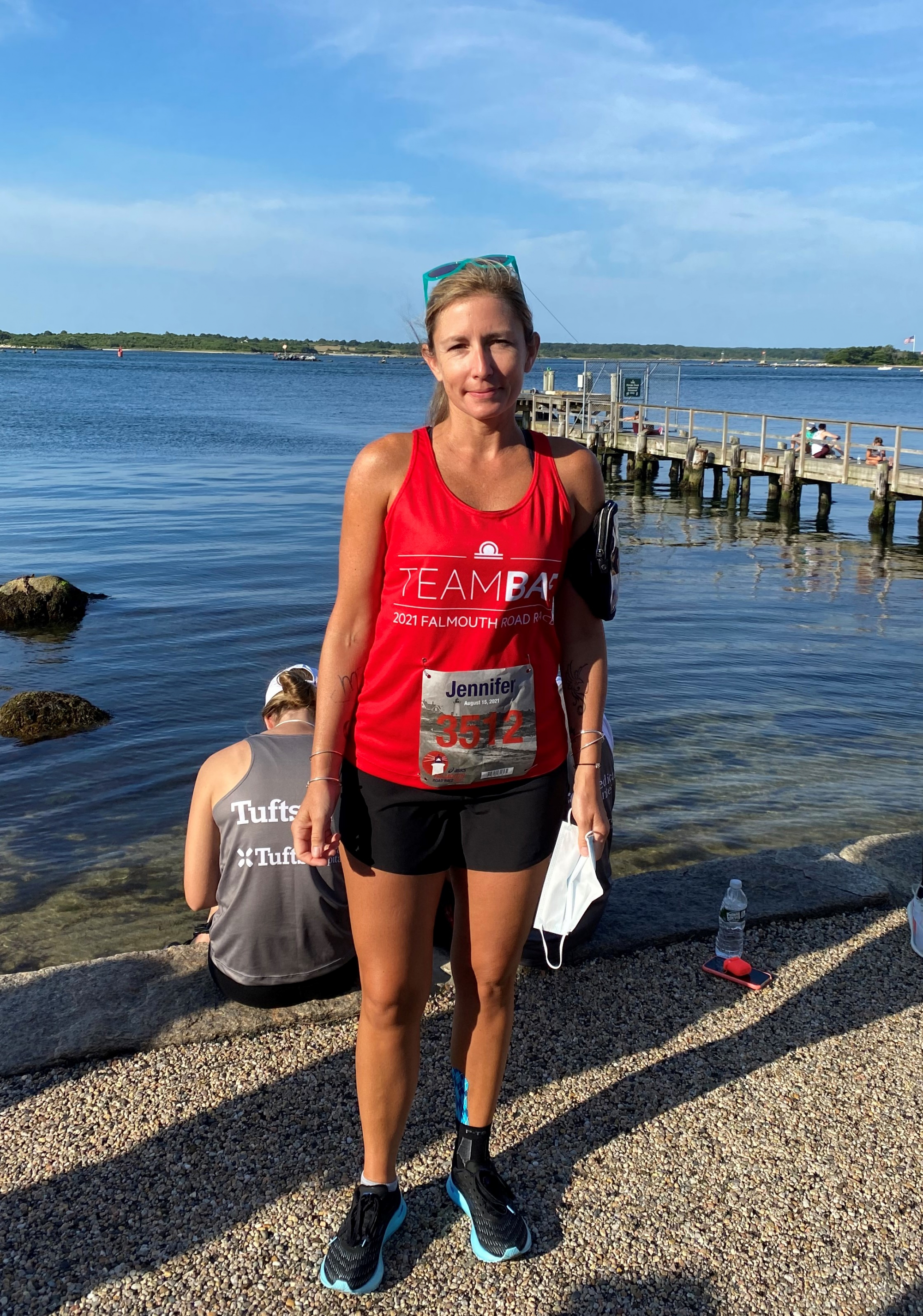 I didn’t run the rest of August. But in September, Cindy told me to get back out there. She was still performing her magic twice a week and told me it was time to start building my strength back. With her therapy and support through September and early October, I am now back to running five miles a few times a week.

Five years, three angiograms and two MRIs later, things look promising. I have to have another angiogram next year, and then maybe at my ten-year mark. My doctor has said there really isn’t a long-term protocol for follow up because this treatment is relatively new. There is no set “life-expectancy” yet. You just live.

What do I want you to take away from all of this?

I hope you’ve learned a little. Maybe you didn’t know how common brain aneurysms were or who was susceptible. Maybe now you’re aware of when to seek emergency treatment.